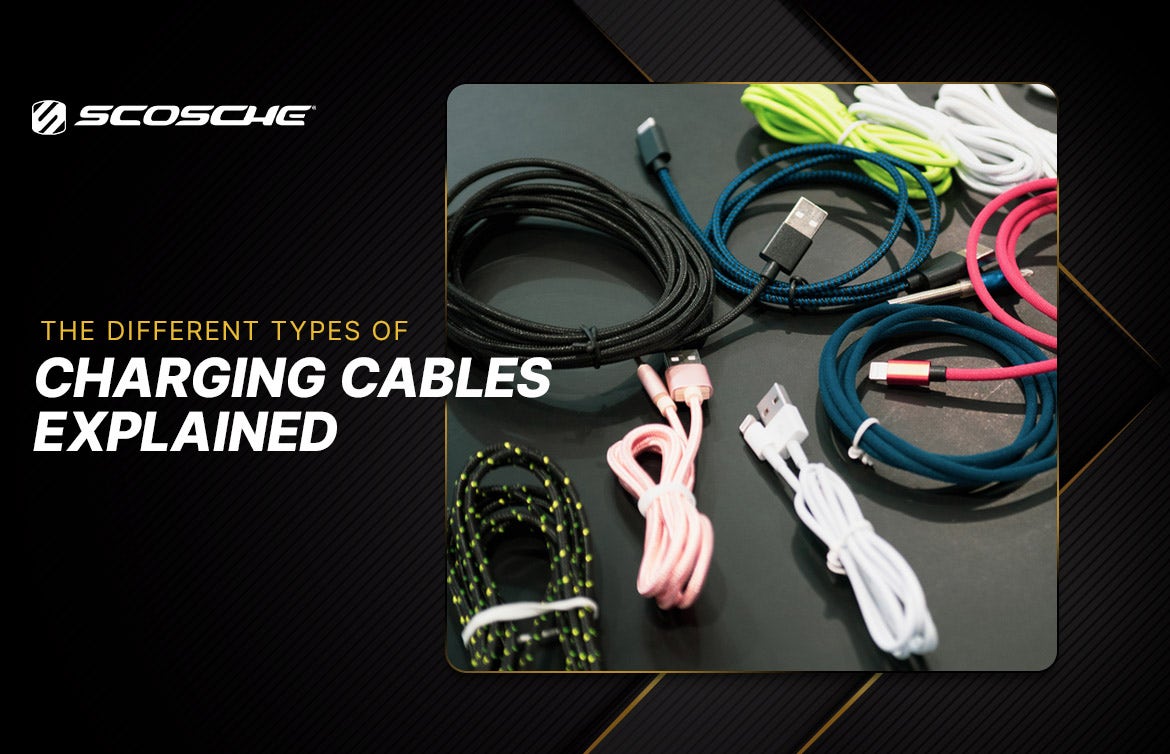 However, with the untold billions of smartphones that are currently in use, the smartphone industry is notorious for failing to bring any sort of consistency to its offerings, particularly as it relates to the types of charging cables used. Naturally, this can be extremely confusing for consumers, leaving them with a variety of questions.

Can you share a single charger with everyone in your home? Can the same charging cable be used for various devices like a laptop and a smartphone? Can the same power adapter be used across platforms?

These are the kinds of questions that can quickly arise for those who are unfamiliar with the various types of charging cables in use today.

The fact is that there are several different types of USB cables on the market but not all of them are compatible with every smartphone in use today. Therefore, it is important to know which ones will work with your particular model of phone or other device.

Part of the reason that folks get confused about charging cables and which phone charger to purchase is that there are a fair number of them on the market. Those types of charging cables include:

USB-A charging cables are most commonly used with computers and laptops. With this type of charging cable, users will see a rectangular shape at the bottom part of the male connector which houses the pins. This is what creates the one-sided connection that spawned the infamous USB superposition meme.

As for the receiving side of things, any device (phones, power banks, etc.) can be connected using different types of charging ends, such as Type B or C, which we will get to momentarily.

USB-A type connectors are extremely common and are likely to be found at one end of a vast array of USB cables.

USB Type B connectors are typically used in conjunction with devices like printers, scanners, external hard drives and the like. These are characterized by the square shape with angled top corners.

Usually, the other end of a USB-B charging cable is going to be Type A or C connectors, so that the device can be connected to a different device, such as a computer.

However, with the development of other types of charging cables, Type B connectors are not as common as other types of cables and are beginning to disappear from the consumer electronics scene.

The USB-Mini was, at one time, revolutionary tech for charging smaller devices like digital cameras, MP3 players and the like. However, as USB technology has continued to evolve and improve, the USB-Mini has since gone extinct. Part of the reason for its ultimate demise is that the USB-Mini was fatally flawed in that it had a poor insertion lifetime, meaning that it would fail in a relatively short amount of time.

However, for posterity’s sake, the USB-Mini was a type of charging cable that was significantly smaller in size when compared to the contemporaries of its time.

As it stands, micro-USB chargers are one of the most widely employed types of charging cables used on earth, as many phones (primarily older models) use this type of connection.

Part of the reason for the popularity of this type of cable is because of its reduced size and superiority over the USB-Mini, while also being OTG (On-The-Go) compliant.

Furthermore, there are two subtypes of micro-USB chargers, that being Type A and Type B.

USB-C is a relatively new type of charging cable. However, in its relatively short lifespan, it has become extremely popular, with many phone manufacturers making this type of connector and port the standard for their devices and significantly increasing sales for different types of USB-C cables.

Part of the reason for their adoption is that USB-C cables enable high-speed data transfer and greater power flow, thus allowing devices to charge more quickly.

Additionally, Type C is the official killer of the USB superposition meme, as these connectors are reversible and thus able to connect to the port in any direction.

This type of charging cable is somewhat unique in that it was designed, and is currently owned, by Apple. As a result, Lightning connectors became the standard means of charging the company’s smartphones since the iPhone 5 was released in 2012. That said, there are a variety of Apple products that use USB-C, such as the iPad Pro, MacBook Pro, iPad Air, MacBook Air and others.

While many speculated that Apple would finally switch over to USB-C completely with the iPad Pro taking on the port in 2018, it seems that there are no such plans in the works.

The Most Popular Types of Charging Cables

In the past several years, smartphone manufacturers have opted to move away from the micro-USB and have begun integrating the USB-C into most of their devices. Moreover, there is the potential for even greater adoption for this type of charging cable as Europe may require all phone manufacturers to use USB-C charging cables. Naturally, this has some major implications for future models of the iPhone.

The reason that so many phones have adopted the USB-C port are many. Firstly, as mentioned earlier, it is much faster in terms of charging. Additionally, it is easier to use given that it does not demand a specific orientation.

To get a scope of just how popular the USB-C charger has become for smartphone devices, GSMArena’s phone finder feature shows that there are currently just under 1,400 Android phones on the market using USB-C.

This means that all Samsung Galaxy phones beyond the S7 feature USB-C support. Moreover, new generations of the Samsung Galaxy Tab also use this type of charging cable.

Additionally, Motorola has made the leap to USB-C as well, which means that all of the company’s modern devices have a USB-C port. The same goes for HTC, OnePlus, Huawei and others.

While Google Pixel also has this type of charging cable, the fact is that it never came with a micro-USB, so the USB-C is native to this device.

In a nutshell, if your phone was manufactured after 2016, there is a pretty good chance that it is using a USB-C style charger.

Between the existing demand for this type of charging cable and Europe’s potential move forcing the USB-C onto manufacturers, there is a chance we might see Apple make the move after all.

Which Type of Charging Cable Do You Need?

As far as figuring out which type of charging cable you need for your phone, computer or otherwise, the best way to establish this answer is to simply reference the item’s original packaging or user manual.

However, if you don’t have either of these, you can simply check with the manufacturer or conduct a simple Google search.

As was touched upon earlier, if your device was produced after 2016, there is a great chance that you will need a USB-C charging cable. However, if you are using an older model Android, then it is highly likely that a micro-USB will be in your future. On the other hand, if you are an iPhone user, then buying an Apple Lightning cable is certainly the way to go.

The fact of the matter is that even if you have a newer Android phone or you are a dedicated Apple user, there is a significant chance that you will still need a micro-USB cable at some point in time as they are still commonplace on Bluetooth® speakers, battery packs and other types of electronics. And if you don’t, a friend or family member likely will.

While many of the devices that utilize such a charging cable tend to come with one in the box, in time, cables will get run down, broken or just lost. This means that you will probably have to buy one at some point.

When purchasing a new cable, many opt to go for the cheapest possible option. While this may be tempting, it is not advisable as poorly made cables often come with a host of potential issues. These problems range from minor annoyances such as slow charging to outright dangerous complications such as becoming a fire hazard.

In fact, when USB-C was still new to the market, many cables were manufactured incorrectly and damaged devices. While modern cables are far less likely to have such an issue, this served as a warning to many that it is best to just ante up for a good cable.

That said, you don’t have to go directly to the manufacturer to get a cable. However, it is advisable to stick with reputable, recognizable brands like Scosche.

Moreover, when purchasing a new charging cable, be sure to take length into consideration. While short cables can be good for portability and home use, they can also leave you stuck holding your device next to the power outlet as your phone charges. On the other hand, if the cable is too long, it can become tangled and inconvenient to bring places.

If you are looking for that Goldilocks solution, three feet tends to be a good all-in-one type of solution. This is long enough to use your phone while it is connected to a battery pack in your pocket but still short enough to use while at a desk.

As you have seen, there are a variety of different types of charging cables in use today. Not all of them are going to work for every device of every manufacturer, so making sure that you have the right cable for you is important.

However, with the advent of wireless charging, new options are becoming available to consumers as well.

Nonetheless, while charging cables are still a commonplace piece of equipment, getting quality products is vital to maintaining your equipment and a great experience. If you need to pick up a new charging cable, shop Scosche’s collection of cables and adapters to find the right one for your device.