A Comprehensive Guide: How Does Wireless Charging Work? 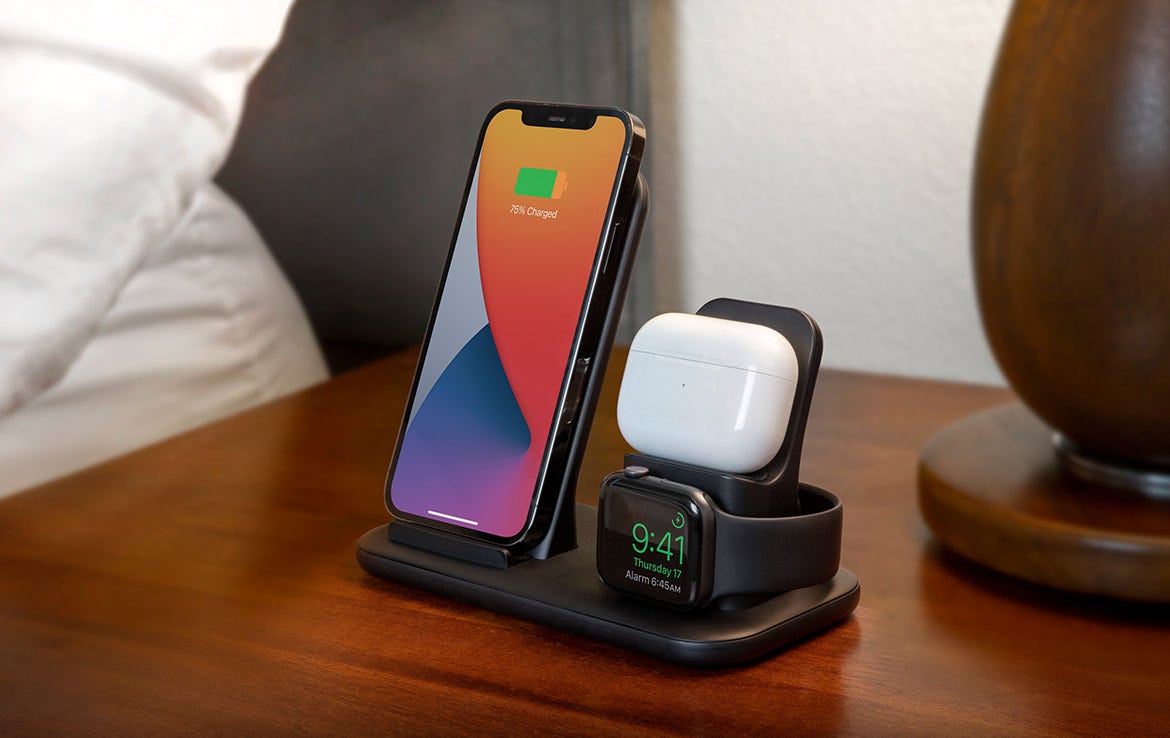 We all love our devices, but we know they have drawbacks. One of the biggest being that they need to be charged regularly. The standard route of giving your phone a boost involves dealing with messy and annoying cables, but that’s soon becoming a thing of the past.

These days, we have the advantage of refueling our tech via wireless charging. That means no more tangled cables, and no more broken adapters.

But what is wireless charging and how does it work? Understanding a thing or two about this technology can help you decide whether or not it’s something you want to start using yourself. Plus, if you’re into technology and love learning how the sausage is made, so to speak, you just might find this stuff fascinating.

What Is Wireless Charging?

Wireless charging powers electronics via magnetic induction facilitated by a charging pad plugged into the wall. Simply place your device on the charging pad and it will send energy to the battery of the device.

Wireless charging, also known as inductive charging or cordless charging, is the technology of charging batteries through electromagnetic induction. Best for devices that don’t require a huge amount of power, wireless charging has been adopted for phones, smartwatches, tablets and headphones. With that being said, wireless charging tech is even being developed for some electric cars, so don’t be surprised if you start to see it on a larger scale in the coming years.

Contrary to popular belief, the concept of wireless charging isn’t actually all that new. At its core, the technology relies on a concept called magnetic induction, first discovered by Michael Faraday in 1831. But it wasn’t until inventor Nikola Tesla developed electro-dynamic induction to wirelessly light up lamps in New York City in 1894 that wireless charging was truly born.

Since then, the technology has developed slowly, only really taking off in the last decade. The first major phone to offer wireless charging was the Palm Pre in 2009. Wireless charging became more widespread when the industry adopted the charging standard Qi (pronounced “chi”). Now, Qi-compatible products work across various phone brands and models, and there’s likely a Qi wireless charger available for your device.

The Qi standard was developed and is maintained by the Wireless Power Consortium (WPC), and it delivers between 5-15W of power to small devices. Unfortunately, Qi devices are limited to charging iPhones at a rate of 7.5W, but Apple has created their own solution.

Apple released their own wireless charging technology called MagSafe® in October of 2020. All iPhones beginning with the iPhone 12 series are equipped with Apple’s proprietary magnetic wireless charging technology. The great thing about MagSafe is that it charges iPhones faster than Qi, at a rate of 15 watts. Because the magnets in the iPhone mean it more precisely aligns with the coils in the MagSafe charging puck, it’s also more efficient and easier to use.

How Does Wireless Charging Work?

Wireless charging works by transferring energy from a base pad with a metal coil to another coil inside your device.

Wireless charging works by transferring energy from a sender to a receiver through tightly-coupled electromagnetic induction. Electromagnetic induction occurs when two copper coils in the sender generate an electrical current that a receiver coil then turns into electricity. For phones, this means a charging pad generates the current, and the phone picks it up and turns it into electricity then stored in the battery.

The larger the coils, the greater distance the charge can travel. But Qi wireless charging pads are only a few inches in diameter, limiting the charge distance to 4 centimeters. Of course, the charging device itself will need to be connected to an electrical outlet, so it’s not truly wireless.

Just like any other kind of technology, wireless charging comes with a set of advantages and disadvantages that you should know. There are a few excellent benefits to making the switch to a wireless charger, but you want to make sure you also consider the disadvantages. Here are the main pros and cons to consider.

Con: It Can Be Slower

Right now, wireless charging with Qi is generally slower than regular charging because it loses power during the wireless transmission process. Typically, a standard charging cable will be up to 30 percent faster than a wireless dock, but that’s diminishing as the technology advances.

Both the Apple and Qi standards consistently get quicker and quicker and can currently support speeds of up to 15W. But they still aren’t as fast as wired chargers. To compare, Power Delivery chargers can charge phones via USB-C, which is three times faster than regular chargers.

Because of the relatively slow speeds, wireless charging isn’t for every scenario. For example, it’s probably not the best choice for travel and other scenarios where you might need a big boost in a short period of time. However, it’s a convenient option for powering up your phone when you have a bit of extra time, like at bedtime or while you’re working.

Con: It Doesn’t Work with Every Phone and Case

As of this year, over 200 devices have adopted built-in Qi wireless technology, which covers virtually all the most common phone brands.

With that being said, the technology is not built into every single phone. It’s currently compatible with Apple iPhone 8 and newer, Samsung Galaxy S6 and newer and Samsung Galaxy Note 5 and newer, as well as many of the top-selling devices from Google, Nokia, LG, Sony, Microsoft and others. Older phones that don't have a receiver coil installed can use Qi-certified covers to take advantage of this technology.

You can also use it for popular models of Bluetooth® speakers and headphones, including all AirPods®. Still, it’s important to check with your phone’s instructions to ensure compatibility.

There are some phones and devices that won’t work with wireless chargers. Specifically, phone backs need to be plastic or glass to use wireless charging because the technology won’t transfer through metal. This is also something to keep in mind when selecting your phone case, as metal cases and those that are too thick could inhibit wireless charging.

The reality is that sometimes it’s necessary to still use your phone while it’s charging. Whether it’s scrolling at night before bed or while talking on the phone, it’s very helpful to sometimes be able to keep your phone on the charger while it’s in use. Unfortunately, phones are a bit tougher to use when charging wirelessly because they must lie stationary on the charging pad.

One of the most appealing reasons to switch to wireless charging is that it’s tidier than traditional charging. Unlike the random unruly charging cables littered about your bedroom, office, car and kitchen counters, wireless chargers feature a neat tabletop pad that doesn’t move. If you live a minimalist lifestyle and prefer counters, desktops and tables free of clutter, you’ll definitely enjoy the simplicity of going wireless.

This cleaner design also makes it easier and more convenient for you since there’s no more fussing with trying to find the right cable and fit it into your device. Simply drop the phone onto the charging pad and let it power up. There are a wide variety of wireless charging dock styles out there to suit your specific needs and preferences. You’ll even find styles to match the decor of your home or office.

Pro: It’s Better for Your Phone

Another benefit? This technology may actually help you get more years from your device and your charger. That’s because wireless charging puts less stress on the charging port of your phone, which wears over time when inserted with cables again and again.

We’ve all experienced the dreaded malfunctioning charging cable and port, but going wireless eliminates many of these issues because of its simpler design. With no plugging in and unplugging, you can expect your wireless charger to last longer than a typical phone charging cable.

As Qi charging pads become more widespread, there is less need to fret when you run out of battery while on the go. You can get a wireless charging mount for your car or even embed charging pads into your furniture. Brilliant, right? Thanks to its portable convenience and simpler design, we may even start to see more and more public wireless charging stations pop up in airports, train stations, hotels, shopping malls and other areas.

As you probably already know from shopping for tech accessories, wireless chargers span the spectrum of price, design and quality. If you want to get the most bang for your buck, make sure you select a wireless charging station, mount or pad that’s built to last. Here’s what to look for in a wireless charger.

Wireless Charging Is Here to Stay

As wireless chargers get more efficient, the technology will spread further. Indeed, the wireless charging market is expected to grow by 22 percent by 2027, so it’s a technology you will want to embrace. While we don’t see traditional charging cables going away anytime soon — in fact, these too are getting better and faster with time — wireless is certainly here to stay.

One of the main industry trends to watch out for is reverse wireless charging, which lets you use smartphones as wireless charging pads for other devices. This way, you can charge smaller accessories like earbuds or smartwatches, and even other phones. So when your friend’s phone battery dies, you have them covered with yours. Amazing, right?

Wireless charging is the way of the future. And now that you know how it works, you’ll be better equipped to integrate it into your lifestyle. We recommend investing in a high-quality Qi-certified wireless charger from our store to see the many benefits of this technology for yourself.