What Is a Power Inverter? A Detailed Guide 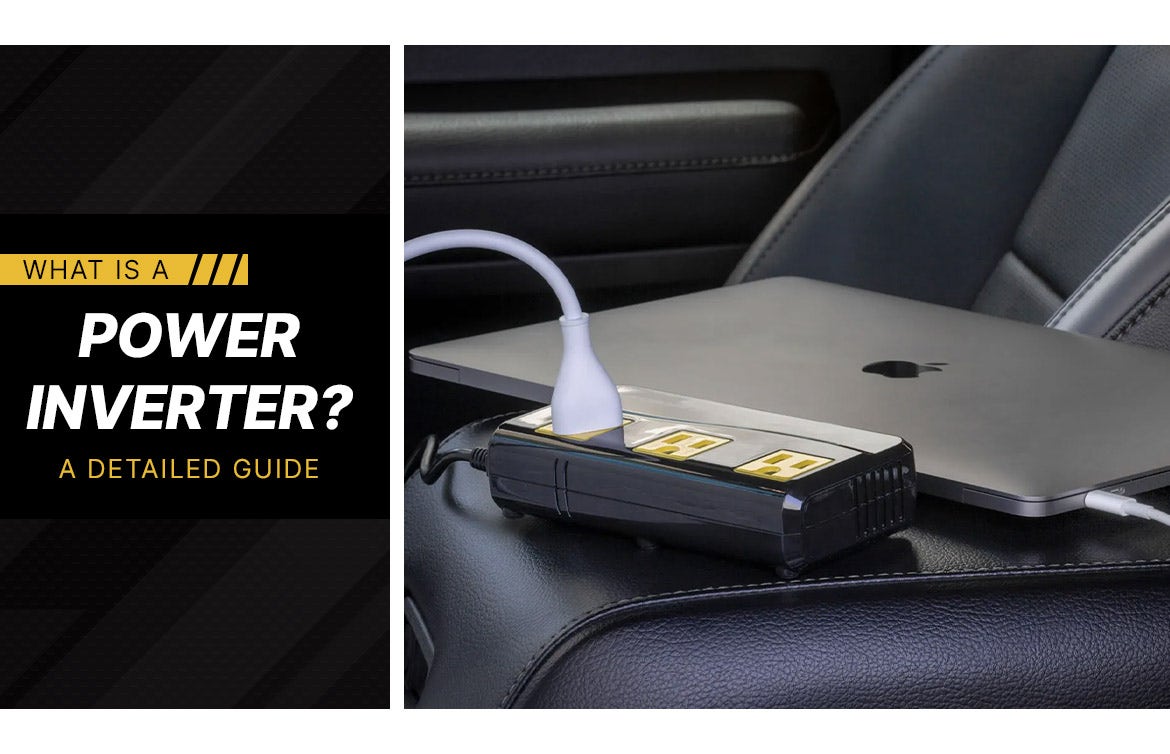 Do you need a power inverter? If you do a lot of traveling, the answer is a resounding yes. But what is a power inverter, exactly? Scosche offers a detailed guide on power inverters, covering everything from wattage usage to convenient features and more. Ready to invest in a power inverter for your pick-up truck, RV or boat? Let’s dive into everything portable power inverter. At the end of the guide, we’ll also offer some excellent suggestions of Scosche power inverters to help you make a decision that best suits your mode of transportation.

What Is a Power Inverter?

Simply put, power inverters convert Direct Current (DC) power from your vehicle’s 12V electrical system into Alternating Current (AC) that can be used for a standard 110V outlet. They can be used to plug in and power all kinds of electrical items, from small appliances and tools to  laptops. Inverters can also charge devices, like phones, tablets and cameras, in addition to keeping them powered.

To better understand power inverters, it helps to know how DC and AC energy works.

Direct Current (DC) is the electricity we all know that uses a flow of electrons. This direct flow is what turns on things like phones and flashlights — anything that has a circuit and unbroken loop of electrical current. These are often items that work off batteries. Hint: You can’t simply grab a 12-pack of DC batteries at the store.

Alternating current (AC) works a little differently, with the electrical current jumping back and forth, instead of a straight flow. This is the type of current used in our homes to power everyday items like lamps, electronics like laptops and appliances.

Cars run on batteries, which is why they put out a DC voltage. And since cars run on DC voltage, you will need a car power inverter if you plan to use certain AC electronics on the road and use your car’s battery as a power source. Essentially, a power inverter increases the voltage and uses transistors and semiconductors to make the current jump back and forth, mimicking the AC current the electronics use at home.

So what kind of AC electronics need a power inverter to handle a DC car battery?

Get Yourself a Power Inverter

Types of Electronics That Require a Power Inverter

Smaller electronics, like phones and tablets, can simply use a 12V Adapter. These types of adapters plug directly into your car’s auxiliary power outlet (AKA the cigarette lighter), or accessory jacks. Most modern cars also have USB ports for charging phones, too.

When you need to charge or power an AC-powered electronics item, however, you will need a power inverter. So what kind of AC electronics are we talking about, if not a phone or laptop?

Laptop computers —  many modern small laptops can be powered directly from the 12V outlet using a Power Delivery adapter, but larger models need to plug into an AC outlet.

Entertainment systems — If your kids watch DVD players in the car, power inverters will keep them entertained for hours without killing your car’s battery.

Small power tools — If you work in construction and need to hook up a power tool like a drill to your car’s battery, you will need an inverter.

It’s critical to choose the right power inverter for the job. You don’t want to draw too much power for an electronic that requires only a 12V outlet. Otherwise, you’ll quickly find yourself with a blown fuse or a failed electrical system.

Another way to blow a fuse or cause electrical issues is to plug in too many AC-operating electronics into a power inverter. Tally up the wattage pulled by each item you plug into the inverter and make sure you’re not abusing the wattage pull.

Be mindful of where the inverter plug needs to be inserted. As a general rule, larger power inverters running over 100 watts need to connect to the car battery, not just the 12V outlet. Here’s a general breakdown of the wattage for common items:

Ultimately, pay attention to the wattage of the power inverter and what the electronics power needs are to create better AC/DC harmony.

As we already explained, car power inverters plug directly into the auxiliary power outlet, a 12V socket or into the car battery. Those are the three main options.

Play and Work with a Power Inverter for Your Car

The best power inverters are versatile and portable. Let’s talk a bit more about why these features are important:

A versatile power inverter should be multi-functional and capable of handling different situations and scenarios. It should also be able to charge a variety of electronics or at least be versatile enough to handle what you need to charge. If you need to charge and run a coffee maker at the campground or power tools at a construction site, it needs to be a high-wattage power inverter that can take whatever you throw at it.

Portability is the next feature to consider when shopping for a power inverter. A portable power inverter should be able to easily plug into your car’s auxiliary power port, without having to over-engineer it. Connecting an inverter directly to your car’s battery through the hood of your vehicle requires more advanced skills. The auxiliary port, which was once used more often as a cigarette lighter, can offer enough energy to power a portable inverter. While a portable power inverter offers lower wattage, it’s more convenient for the everyday user.

Power inverters can get warm, especially in a car in the summertime. But you won’t want them to get so warm that they harm expensive items that are plugged into or disrupt plans or activities. So one feature you can look for in high-powered power inverters that have lots of wattage is a built-in fan. A cooling fan can combat any overheating in the switching components and help in the conversion process with increased air flow. However, if your inverter is small enough and features a low wattage, a cooling fan is not necessary and can ventilate naturally.

An LED indicator offers a pair of red and green LED lights that can help you see the health of your power inverter and whether it’s in power mode or a standby power protection mode. For larger inverters that draw a lot of power from your vehicle, this can come in super handy and prevent you from leaving it on when you walk away from your vehicle and any equipment or electronics you might be using.

Car power inverters are a necessity for many of us. If you’re looking for a quality inverter for your car, Scosche has several options from which to choose. Here is a lineup of the top-performing power inverters that we offer:

Looking for a few more outlets? Our DoubleUp Dual 12V Adapter is a nice step-up from a single adapter. With a combination of two 12V sockets and two 12W USB ports, this handy adapter charges four electronics all at once, which is super convenient when everyone in the car needs to charge their phone or tablet. It also features a power button to prevent draining your car battery when it’s not being used. Overall, it offers a total of 100W of charging power.

The InVert 100 is a portable power inverter that converts DC to AC efficiently and safely. Charge any number of electronics on this inverter, from tablets and phones to laptops and gaming systems. It can even take on small power tools and small appliances. Plug the InVert100 directly into your car’s 12V auxiliary port to begin charging and powering.

It offers a 12-watt (2.4A) USB port and indicators with red and green lights to alert you whether it’s in power mode or standby power protection mode. One practical feature of the InVert 100 is its integrated fan, keeping itself cool so items don’t overheat. This offers a significant advantage when driving around on hot days.

Check out the InVert 200. This is one of our most versatile, multi-functional portable power inverters, offering many great features. For instance, it comes equipped with a Power Protection Mode (PPM), keeping up to three electronics safe — as well as the inverter — and preventing overcharging.

Like the InVert 100, the 200 also has an LED indicator to signal the PPM and standby modes. And with 200 watts of electrical currents, you can power several items like laptops, tools and more. All together, it’s the perfect portable power inverter for taking long road trips, off-road camping trips and so much more.

Take the effort to consider what kinds of electronics you need to charge on your journey. Is it merely a dash cam for recording your drive? Or do you need something more substantial with 1,000 watts to run power tools? Make a list of the items you typically use on a drive or trip to the construction site, adding a little bit of buffer room, too. Add up the combined wattage and shoot for an appropriately-sized portable power inverter.

Above all, make sure to choose a portable power inverter from a reputable brand. Scosche power inverters come with Lifetime Technical Support. Have questions about power inverters and need help choosing the right model for your vehicle? Get in touch!